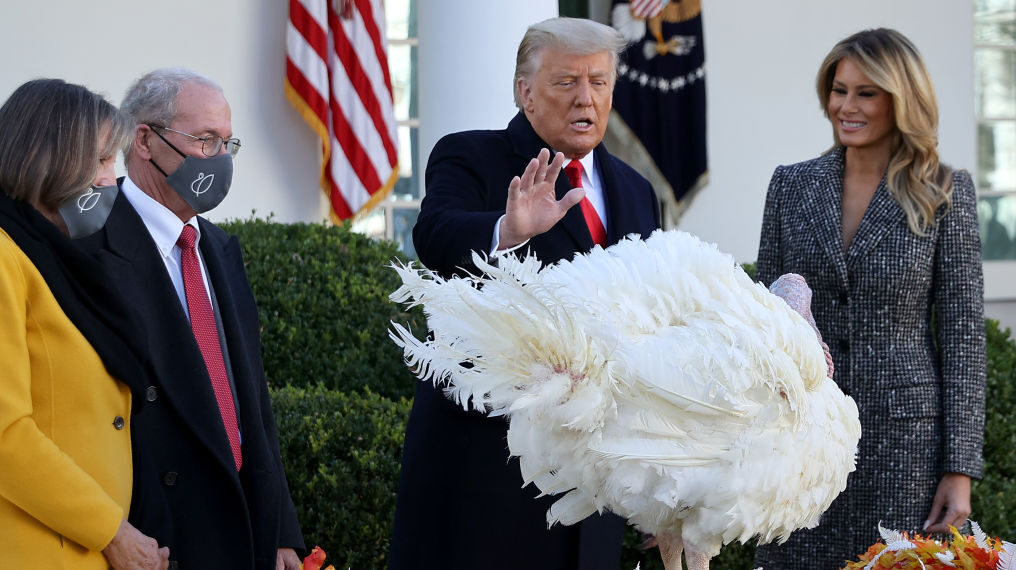 WASHINGTON — President Donald Trump proclaimed a national day of Thanksgiving for the fourth time on Wednesday, citing his nation’s courage in the face of a pandemic that continues to kill more than 11,000 Americans per week—but still urging citizens to “gather” despite his own government’s advice to the contrary.

2020 marks the 400th anniversary of the Mayflower’s journey across the Atlantic, and a year when at least one of every 25 Americans is a confirmed carrier of the deadly coronavirus contagion.

The Centers for Disease Control and Prevention has dropped a hammer on traditional family closeness, advising Americans that the “safest choice” is to celebrate “virtually” or enjoy turkey and all the trimmings only “with the people you live with.”

Trump, who pooh-poohs masks in the West Wing and has already survived a Covid-19 infection himself, thumbed his nose at the health agency. “I encourage all Americans to gather, in homes and places of worship, to offer a prayer of thanks to God for our many blessings,” he said.

Roughly 110 miles to the northeast in Wilmington, Delaware, former Vice President Joe Biden made a different kind of declaration, announcing as he plunged ahead with a White House transition that Americans had a “patriotic duty” to slow the spread of the disease by wearing masks.

Trump said the perseverance, sacrifice and benevolent spirit of paramedics, doctors, essential workers and ordinary neighbors matched that of the 17th Century pilgrims who celebrated the first Thanksgiving with Native Americans in what is now Massachusetts.

Trump continued a longstanding tradition of presidential Thanksgiving proclamations that began in 1789 with George Washington. The first president was echoing the Continental Congress, which designated December 18, 1777 “for solemn thanksgiving and praise; that with one heart and one voice the good people may express the grateful feelings of their hearts, and consecrate themselves to the service of their divine benefactor.”

The formally written White House pronouncements often call for prayers of gratitude, but times of adversity have drawn different responses.

In October 1863, just as the tide was turning in the bloody Civil War, Abraham Lincoln asked Americans to mark victories in battle by praying for those who were suffering, and for the healing and restoration of one unified nation. Until then annual Thanksgiving holidays had largely been observed by state governments.

Franklin Delano Roosevelt expressed the nation’s “dependence upon Almighty God” nearly 80 years later, recalling the 23rd Psalm as he asked Americans to look to the heavens for strength and comfort: “The Lord is my shepherd, I shall not want.”

He quoted the entire psalm.

Roosevelt in 1942 would officially designate the fourth Thursday in November as Thanksgiving Day.

Herbert Hoover found a silver lining in the Great Depression, proclaiming in 1930 that Americans should be thankful for suffering “far less than other peoples from the present world difficulties.”

John F. Kennedy’s proclamation in November 1963 called for Americans to gather on Thanksgiving Day “in sanctuaries dedicated to worship and in homes blessed by family affection to express our gratitude for the glorious gifts of God; and let us earnestly and humbly pray that He will continue to guide and sustain us in the great unfinished tasks of achieving peace, justice, and understanding among all men and nations and of ending misery and suffering wherever they exist.”

Kennedy would die 18 days later, assassinated by a sniper’s bullet.

Ronald Reagan took the opportunity to swipe at federal welfare programs, which he believed enabled endless cycles of poverty. “Thanksgiving has become a day when Americans extend a helping hand to the less fortunate. Long before there was a government welfare program, this spirit of voluntary giving was ingrained in the American character,” Reagan said. “Americans have always understood that, truly, one must give in order to receive.”

Two months after the 9/11 terror attacks in 2001, George W. Bush offered gratitude to God for Americans’ unified resolve. Gratitude, he said, should lead to compassion for those who were suffering.

Trump on Wednesday subtly touted his own administration’s work on the Covid-19 pandemic, saying Americans have made “significant breakthroughs that will end this crisis, rebuilding our stockpiles, revamping our manufacturing capabilities, and developing groundbreaking therapeutics and life-saving vaccines on record-shattering timeframes.”

He also recalled how the Mayflower’s passengers “endured two long months at sea, tired and hungry” and “lost nearly half of their fellow travelers to exposure, disease, and starvation” during the winter that followed.

“Despite unimaginable hardships, these first Americans remained firm in their faith and unwavering in their commitment to their dreams,” he said. “They forged friendships with the Wampanoag Tribe, fostered a spirit of common purpose among themselves, and trusted in God to provide for them.”

Today, Trump said, “[i]n the midst of suffering and loss, we are witnessing the remarkable courage and boundless generosity of the American people as they come to the aid of those in need, reflecting the spirit of those first settlers who worked together to meet the needs of their community.”

On Thursday, he said, Americans will “reaffirm our everlasting gratitude for all that we enjoy” and “commemorate the legacy of generosity bestowed upon us by our forbearers [sic].”