VIDEO: Police Arrest Covid-Positive Lifeguard for Surfing Without a Mask

Sep 08, 2020WorldComments Off on VIDEO: Police Arrest Covid-Positive Lifeguard for Surfing Without a Mask 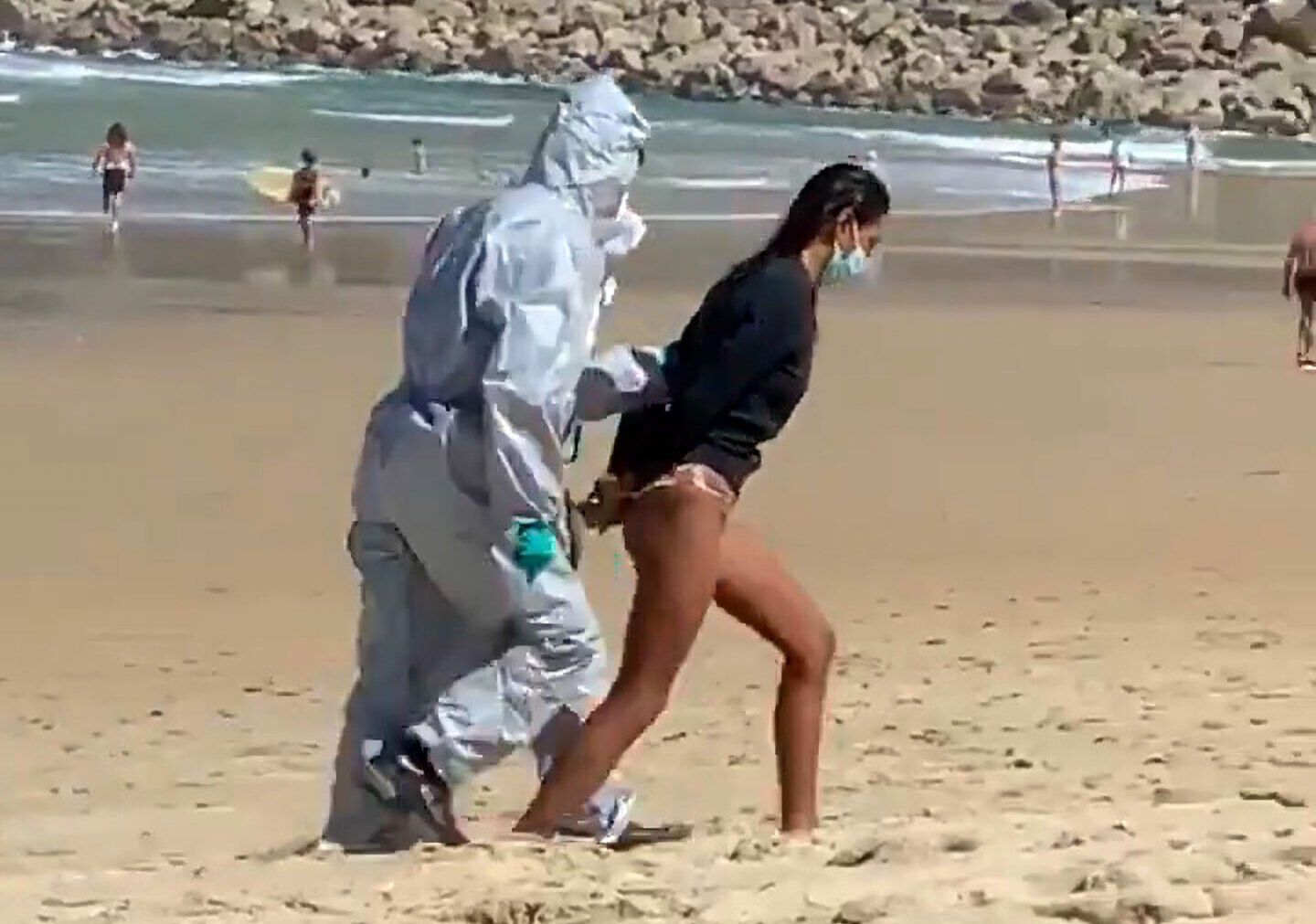 A Spanish lifeguard who was ordered to quarantine after testing positive for the coronavirus decided go surfing instead—and got busted.

The woman, whose name and age were not immediately available, was arrested at Zurriola Beach in San Sebastian on Sept. 7 by police, some wearing full hazmat gear, for breaking quarantine and initially refusing to exit the water.

Authorities were alerted to the surfing lifeguard’s presence by her coworkers from another nearby beach, who saw her enter the water.

At first, the woman was approached by the crew of a police boat who asked her to exit the water. She ignored their orders, staying in the water another hour before coming ashore and being escorted off the beach by authorities.

The events leading up to the arrest were captured by a variety of videos.

One witness who filmed an early part of the incident said, “While I was surfing, a lifeguard was telling a woman to get out of the water because she tested positive for coronavirus, but she refused and now they’re waiting for her.”

A subsequent video shows police surrounding the uncooperative suspect on the beach. Finally, the surfer—now wearing a face mask—is handcuffed and escorted off the beach by two officers in hazmat suits.

The surfer has been charged with gross disobedience and a crime against public health. She is expected to face a heavy fine for breaching strict quarantine rules, which rise to $7,125. However, if authorities learn she passed Covid-19 to another person via her actions, she could be fined more than $130,000.

Such public arrests reflect Spain authorities’ determination to contain the coronavirus, which has been resurging in the country after some restrictions on public gatherings were lifted in recent weeks. Thus far, according to the World Health Organization (WHO), the country has recorded 498,989 confirmed cases of COVID-19, with 29,418 deaths.

Spain is surpassing other European nations reeling from the pandemic, such as France, Britain and Italy.

Reported cases have been on the uptick, totaling 10,476 on Sept. 5 — the most recent date the WHO had numbers for‚ which topped the previous peak of 9,222 cases on April 1. Despite that, Spain’s daily death totals are still far below their levels of last spring. The largest daily death toll, 888, occurred on March 30, while the Sept. 5 figure was 184.

The Basque Country, where the surfer arrest took place, was Spain’s third worst-affected region in August.  National outbreaks have also been linked to transmission between younger demos, while hree-quarters of those who test positive exhibit no symptoms. Spain did well in controlling the spread during an earlier lockdown; now it is recording Europe’s fastest-rising cases, according to the EDCD (European Centre for Disease Prevention and Control.)